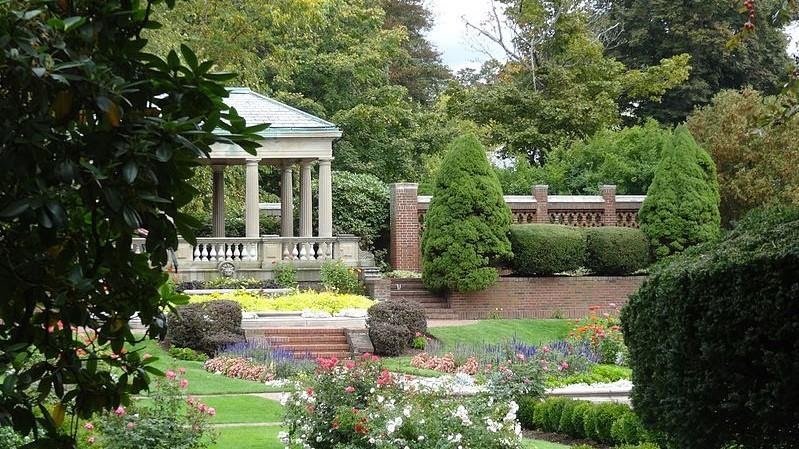 The Origins of the Lynch Park Rose Garden in Beverly

Lynch Park is one of the most beautiful and popular locations in Beverly. It’s often used for weddings, concerts, children’s events, and outdoor social gatherings of all kinds. If you stop by Lynch park on a weekend during the warmer months, you’ll usually find plenty of park-goers lounging, strolling the grounds, or sunbathing at the park’s beach.

The park is located on the eastern side of Beverly and takes up the entirety of a small peninsula. The peninsula juts directly into the Beverly Channel, providing enchanting views of the surrounding waters and the City of Beverly itself.

Of course, one of the most striking aspects of Lynch Park is its iconic rose garden. Aptly named “The Lynch Park Rose Garden,” this alluring space is closely tied to the history of the park itself and has an interesting history all its own.

The History of Lynch Park

Lynch Park is known formally known as the David S. Lynch Memorial Park. Its history dates to the 1700s.

During the Revolutionary War, the area was known as “Woodberry’s Point” and it contained a fort that was a “key strategic post for defending Beverly Harbor,” according to Primary Research. The name of the location was eventually changed to “Burgess Point” and was then acquired by the Evans family, who made it their estate.

The Evans estate was a revered location on the North Shore, and the family built multiple structures upon it.

The Carriage House at Lynch Park was originally designed to house horses and carriages (hence the name) but is now a space for events. Where the Rose Garden is located today, there used to be the Stetson cottage, which was leased out in the summers of 1909 and 1910 by President Taft. There was once also an Italian monastery located there, but it was destroyed by vandals in 1966.

Belle Evans was the daughter of the original Evans who bought the land. When she died in 1936, she left the estate to Beverly Hospital.

Lynch Park was transformed from an estate to a park in 1943 when Beverly Hospital sold the old Evans estate to the city of Beverly for $50,000. The park earned its name from David S. Lynch, a part-owner of a leather company in Salem who donated $400,000 to the city for park purposes upon his death. Lynch’s donation was instrumental in the city’s purchase.

The Origins of the Lynch Park Rose Garden

The rose garden, which is often referred to as an “Italian rose garden,” was planted by the Evans family after Stetson Cottage was moved. The cottage was cut into two pieces and shipped across the harbor to Marblehead, where it was reassembled. Still, according to some records, the rose garden may have been planted behind the home and then expanded when it was removed.

The rose garden stayed until the 1960’s, when it was partially destroyed by the same vandals who burned down the monastery. It was since replanted and renovated.

Lynch Park is home to iconic statues and figures. The rose garden contains two iconic lion statues, which watch over the park from their perches atop two brick railings.

The entrance to the rose garden also contains two stone plaques on brick pillars. Together, they read, “Whosoever enters here let him Beware/For he shall nevermore escape nor be free of my spell.”

Although this message might sound ominous, it is merely a testament to the rose garden’s beauty and a reminder of just how ionic the garden is in the minds of Beverly’s locals. Few who enter the garden forget the experience. Many locals return regularly in the warm months to find peace in the space and to bask in the park’s beauty.