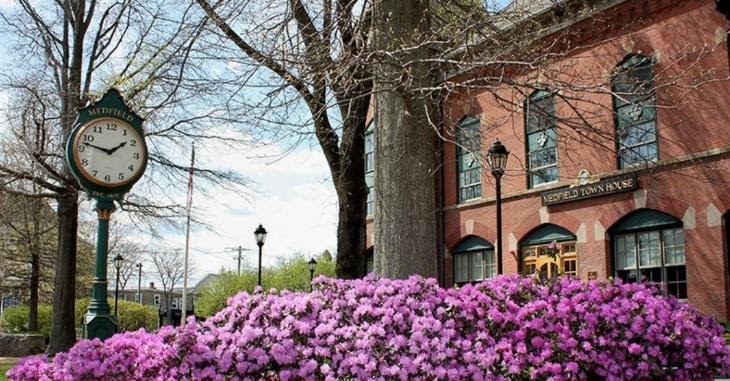 The Town of Medfield (02052) is a 14.59-square-mile community in Norfolk County, Massachusetts, southwest of Boston. It’s beloved for its excellent public schools, family-friendly atmosphere, and abundant parks. It’s home to the Medfield Rhododendron Reservation, a 196-acre nature reserve that contains a stand of the rare rhododendron species Rhododendron Maximum, also known as the rosebay rhododendron or the great laurel.

Medfield is a suburban community that consists mostly of homeowners, with a few rental properties. There are 5 public schools, which include 3 elementary schools (Dale, Ralph Wheelock, and Memorial), one middle school (Thomas Blake Middle School), and a high school (Medfield High School).

Medfield itself, although characteristic of many small New England towns, has some unique attributes. If you sit outside at one of Medfield’s cafes or restaurants for long enough during the warm months, you’ll likely hear a freight train go by on the nearby railway. The trains come about 4 times each day, but the locals will tell you that you get used to the sound pretty quickly if you live there.

Medfield also has a few claims to fame. Boxing fans might remember the famous fight between Medfield native Peter McNeeley and Mike Tyson in 1995. Although the fight only lasted halfway through the first round, McNeeley made sure to take the opportunity to give a literal “shout-out” to his hometown, yelling “…and last, but not least, Medfield!” in commemorations during his pre-fight interview.

Finally, some of the filming for Shutter Island, a psychological thriller starring Leonardo DiCaprio, also took place in Medfield. The shuttered (pun intended) Medfield State Hospital was used as a backdrop. If you visit the site with a tablet or smartphone in hand, you can even line up stills of the film with specific buildings on the campus.

In the 2016 presidential election, Medfield voted:

The residential Tax Rate is on the medium/high side at $17.83 per thousand with an average home tax bill of $12,904 (annual tax on homes range from $4K to $15K in eastern Massachusetts).

Unfortunately, Medfield does not have a commuter rail stop. You’d have to drive to the stop at Walpole and park to take the train into the city. The station parking lot has the capacity for 345 vehicles, but there are private lots and garages nearby if it’s full. Medfield is also isolated from major highways, so Route 109 can get pretty jammed during rush hour.

If you want to take the highway into Boston, your best bet is to take Central Avenue northwest to get to I-95, then jump onto I-90 to go east into Coston. You could also take 109 to I-95 and drive north to I-90, or you could also take I-93 eastward and then northward into Boston. If you’re driving from Medfield to downtown Boston on a Monday morning, you can expect a commute that lasts anywhere from 50 minutes to almost 2 hours.

Based on their coverage maps of the Boston area, both Lyft and Uber provide rideshare services to Medfield. However, there may not be as many drivers in Medfield as you’d expect closer to the city. No other rideshare providers are active in the Medfield area. There are no Zipcar lots in or near Medfield, either.

Medfield invested $39.6 million in teachers and schools through its annual budget in 2018.

Please note “Advanced” and “Proficient” are both subsets of “Proficient or Higher”. The numbers are percentages of Medfield students in each testing result category.

Originally a town of farms and mills, Medfield saw the introduction of some industries in the 19th and 20th centuries. But it has long been sparsely populated compared to other Massachusetts towns, which made it ideal for suburban development.

There aren’t many rental properties available in Medfield, and the median home values in Medfield are well above state and national medians. Nonetheless, most residents say it’s an ideal place for settling down and raising a family if you have the opportunity.

Medfield isn’t well-known for its nightlife, but families with kids won’t be short on activities.

If you’re looking for an active bar or nightclub scene, you might have more luck in Walpole, Norwood, or in Boston itself. That said, there are a handful of bars in Medfield, so you have some options if you only like to go out for a drink with friends and family every once in a while (Nosh & Grog is supposed to have a great beer menu).

Sprint, Verizon, and AT&T have excellent cell phone coverage in Medfield, MA according to their own maps. T-Mobile has decent coverage downtown, but it isn’t as strong in the greater Medfield area.

Medfield isn’t home to any national or minor league sports teams, but Medfield High School does have a robust athletics program. If you have a student at Medfield High School, you could watch them compete against other towns in baseball, basketball, football, cross country, ice hockey, and more.

Greater Medfield is mostly suburban, so you’ll need wheels to get around. But if you live downtown, you can walk almost anywhere you need to. The town has a walkability score of 79 according to walkscore.com, which means it’s “very walkable.”